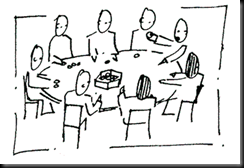 This week saw the last London VMUG of 2010. It featured not only the main session with a mix of updates from the mothership , presentations from users & sponsoring vendors , but a choice of 2 breakout sessions in the morning before the main session.

For the last 3 or 4 VMUG’s , Alan Renouf of virtu-al.net ( and lately vSpecialist ) fame has very kindly been running a PowerShell session , graduating from a presentation to a lab – this time hosted in the “cloud” ( also known as Al’s house! ) – I’m told from the guys who attended it , that it was yet another slice of command line gold.

While I enjoy PowerShell as much as the next man, the alternative breakout session being trialled this time appealed more to me as what Alaric Davies described as a bit of “beard-strokey high level strategy stuff” , namely a roundtable discussion with slightly less of a technical focus than some of the other VMUG subject matter.

As it turned out the subject of the roundtable was about VDI – not something I have a huge day to day exposure to as I’ve said before , but something that interests me as it represents some tough challenges for the virtualisation professional. In terms of workload numbers , a good sized Virtual Server estate could have 1000  workloads running , each reasonably predictable and trended. An equivalent sized VDI implementation could be tens of thousands of much less predicable workloads , raising a significantly different challenge.

In addition to the technical challenges offered by VDI – there is a far greater barrier from the finance department. Several of the delegates at the table found the case hard to justify to their management line, Not only could additional hardware need to be purchased in the server room , but potentially a whole new set of hardware for the desktop in the form of thin clients. It would seam there are potential pitfalls in other areas too, such as licencing , where if you are not careful you could end up attempting to licence your desktop twice , which is something we’d all rather avoid. One of the delegates at the table deliberately  avoided the thin client route – citing the reason that should the VDI project “crash and burn” then at least he would not have to go round and buy everyone a new PC ( presumably shortly followed by clearing his desk ?

In addition to user contributions from the table , we were also lucky enough to have a scattering of VMware staff who were able to offer clarifications / advice when required. on a personal note I felt they gave just the right level of participation, it would have been all too easy for them to have run away a bit with the conversation. Mike Laverick was running as an unofficial compere for the roundtable and I’m sure he’d have interjected if he felt things were loosing sight of their goals.

If you work in virtualisation anywhere around the south east, then I really do urge you to come and take part in the London VMUG. It really is a fantastic source of knowledge , networking and occasionally beermats ! 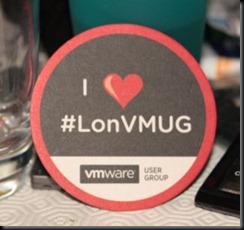 If you’d like more information on the London VMware User Group then check out the VMware Community pages or the LinkedIn Group.

« Trip to IPExpo & Roundtable with Microsoft. Less than a week until Tech Field Day »