Veeam in the Real world – Update on Drive Space usage.
Filed Under: Virtualisation by chris — Leave a comment

Doing a few daily checks today and wanted to compare utilisation between the 2 Veeam backup proxies that are now running in production. After bribe of a cup of coffee to a colleague on the storage team I got a nice load of graphs from our back end storage showing the utilisation of the LUN’s designated for the backup storage. You can quite clearly see the when the full backups finish and the incremental ones start. This combined with the built in compression and inline de-duplication that Veeam Backup uses allows me to make good use of that backup space – only consuming 5.5 TB for nearly 10 days of backup for 20TBs of machines. To use a marketing calculation I’ve seen presented by a well known vendor of de-duplication hardware  that’s (20*10)/5.5 = 40x compression. Not bad for a software product. 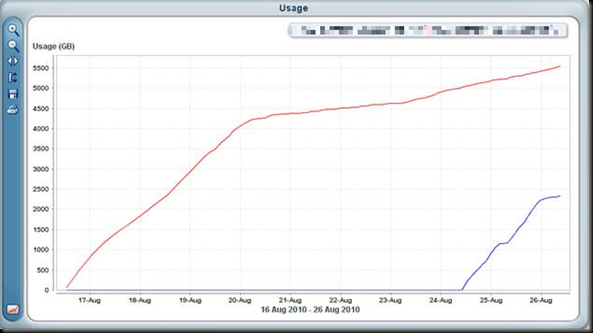 footnote : the blue trace is the 2nd backup proxy – its just finished its full backups , so hopefully that plateau has just been hit.