Rage against the (Virtual) Machine
Filed Under: General by chris — 1 Comment 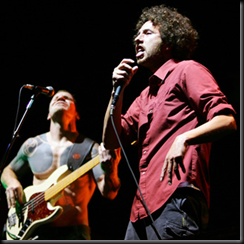 This is one of those posts that started out at the title and content has developed in a somewhat organic fashion. There have been quite a few examples recently that have made me question whether everyone has fully bought into virtualisation as a scaling mechanism. In the traditional debate between scale up and scale out of a solution, Scale out has been thought of as the more complex option of the two , after all in the physical world adding some extra RAM or CPUs to a box is just a matter of powering it off and diving underneath the lid , screwdriver & anti-static strap in hand. Scaling out means you’ve got to think more about procuring an additional box , racking & building it – then you have the challenge of configuring the application. Once you move to a virtual infrastructure , that step is all but removed – being able to clone an existing machine or deploy from template means that you can scale out with ease.

This all comes at a price – traditional licensing models tend to carry a cost per server. In the physical world where a scaled out design was generally reserved for large deployments, the extra cost incurred by this was seen in proportion due to the additional hardware cost. That hardware cost is reduced significantly in the virtual world where smaller deployments would benefit from the agility of scale out.

A prime example of this would be Exchange – scaling out the Hub Transport and Client Access Server roles to small scale VM’s leaves the mailbox server to concentrate on hosting the information stores. An SME would traditionally doe this with a single physical box , but would be discouraged form virtualising an “all in one” box as it would end up as an unusually large VM within the estate. If you were able to split this down into smaller machines without a licence penalty, perhaps the uptake of virtualised exchange would be higher ?

Changing your licensing model to reflect the end user requirements , be it number of concurrent users / per VM / per mailbox etc. seems to be agnostic of the way you achieve those VMs / Mailboxes / User connections and promotes design flexibility. I understand the need to protect revenue streams , but should that be at the expense of end user choice ?