Less than a week until Tech Field Day
Filed Under: Virtualisation by chris — 1 Comment

and I still don’t own an ipad. I’m trying to work out if I *really* need a tablet right now or whether its just an exercise in e-manhood waving at meetings – after all its the content you create , not what you create it on that counts !

As Stephen from Gestalt recently blogged , there isn’t much out there that can take on the ipad when it comes to functionality. I was passing a local electronics outlet today and noticed they actually had a couple of non-iPads out on demo , so I thought I’d try and get a little hands on with them .

The first was the Toshiba Folio 100 Tablet – its got a 10” capacitive screen and runs Android 2.2 I have to admit to being an android fan and have tried one of the early Chinese made tablets running 1.6 on a 7” resistive screen and was hugely underwhelmed. The Toshiba wasn’t that much better. The screen still required a touch heavier than a mason chisel to actually get anything to respond and the “touch sensitive” buttons appeared to operate by committee.. of 1970’s British Leyland workers ( i.e. infrequently )  When a member of staff noticed I was having a play around with it , he came over to demo a few features , but the device crashed when he put a USB key into it. Not the best demo in the world.

Next to the Toshiba was a Samsung Galaxy Tablet – from a construction point of view this looked really well made other than the fact that the designers seemed to have got the plans scaled down a bit. It really isn’t that much bigger than my HD2 phone. the interface looked slightly different to the regular android screen I’m used to and while I could have operated the keyboard with thumbs it really wouldn’t have been worth the £500 investment.

I guess the smart money is just going to have to wait until Android 3.0 for a capable Tablet experience. I will instead concentrate on producing some great content from the meetings and presentations I’ll get to take part in San Jose with the rest of the #TechFieldDay team.

And finally… because its Friday its time for a lolcat for that brief giggle before you go home for the weekend. The model for this belongs to Mike Laverick of http://www.rtfm-ed.co.uk fame. I present to you , Molly. 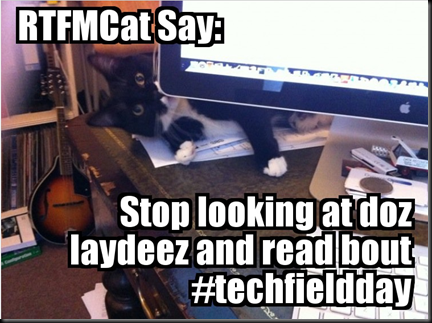 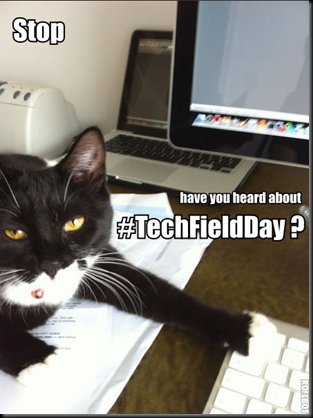