Trip to IPExpo & Roundtable with Microsoft.

My feet have hardly touched the ground since Copenhagen , after a hectic couple of day in the office I’m back on the road again , this time to IPExpo , a 2 day event held at London’s Earls Court.

Prior to hitting the show , myself and a few other bloggers (including Chris Evans from http://storagearchitect.blogspot.com/ and Barry Coombs from http://virtualisedreality.com/ ) where able to meet with with some of the Microsoft Cloud Team , including their General Manager , Zane Adams. As you may have realised from most of my posts, I’d say my flag was pretty firmly in the VMware camp , but I’ve been working with Microsoft products since I was in short trousers so still very keen to hear what they have to say , especially when it comes to their particular take on “what is cloud”

This was the first time I’ve ever done such a roundtable , especially one that’s been recorded – thankfully I was a little bit prepared by my chinwag with Mike Laverick, but somehow this felt a touch more intimidating than a Skype chat.

The session was pretty well organised , with a bit of a talk from Zane about Microsoft vision for the Azure platform and associated technologies, followed by some select questions with a more open Q&A afterwards. In a nutshell , the Azure plan is a platform as a service – if its something you want to take advantage of then now is the time to start to look at your applications and see how they might scale to fit that type of model. This has become a lot more than a pipedream for board level PowerPoint decks. With 70% of the Development effort at Microsoft devoted to something related to cloud technology , its something Microsoft are going to take seriously – past history as shown that usually when they do this , they tend to get results. I enjoyed the opportunity to be able to put some pretty tough questions to Zane and felt that I got some pretty good answers.

A short walk later and I arrived at Earls Court 2 for IPExpo – It was a very different show form VMworld , which of course was still quite fresh in mind , but it was interesting to see more than just raw vendors there. VAR’s and System Integrators where also present , making it a little more rounded. Virtualisation was also only a small part of the show , with sections dedicated to Physical Security , Networking & Storage amongst others , all with badge scanners at the ready for your attention. conversation ranged form a scan badge for freebie exchange to a much more in-depth chat with Magirus about their vBundle product – essentially a “my First vBlock” based on Cisco/EMC hardware with a vSphere virtualisation layer on top. I know that this wasn’t anything especially ground breaking but a neat demo of the integrated EMC management within the VI client and a good chat all the same!

A show wouldn’t be a show without a Veeam stand – today the intrepid man and women in green had something to celebrate , with the official launch of the v5 Backup & Replication product. v5 brings with it a host of new technologies based around being able to run a Vm directly from the compressed and deduplicated backup – allowing verification , item level restore and on demand test beds amongst others. What better way to celebrate it with Vodka & cupcakes ( green of course !! ) 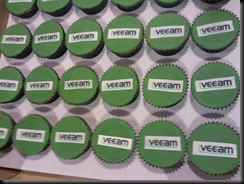 Right at the back of the show was an ICE cube Modular datacentre 40ft unit from SGI which was pretty impressive , not having seen one up close before – its units like them that will go to be the backbone of much of the public cloud datacentres, just add water, power and network for a maximum of 40,000 cores of processing !

While I had a valuable day , I’m not quite sure IPExpo would be something I’d want to do both days for as a delegate – it seemed to be more of a lead generating event than anything else ( though it is great to catch up with current vendors and make sure I’m up on anything interesting they might be doing)