The latest Vkernel Advertapplet has finally been released – I was lucky enough not only to get a pre release briefing , but to view some very early alpha code several months ago. In response to a lot of user feedback (including myself) wanting a better handle on where the bottlenecks are in your environment from a storage point of view.

Vmware themselves have also recognised this need , and will be addressing this in the upcoming vSPhere 4.1 release with SIOC  , about which many of my fellow bloggers have commented on ( here..)

For those not able to put this to use now , VKernel offers an alternative , with a little bit of functionality from its flagship Capacity Analyser product.

Storageview gives you a little window into this functionality by showing you the top 5 VM/Datastore pairs in terms of Storage I/O latency within your VMware environment. One of its top features is that the Datastores can be on FC, iSCSI or NFS ( which has been notoriously difficult to get metrics from )

As with CapacityView and Appview , storage view is a pretty small ( less than 10 Mb ) download , with a dependency on JRE 1.5 or greater. Installation is simple as you’d expect , with the configuration requiring the location of your virtualcenter and some credentials to talk to it.

If you are running Storageview against a reasonably sized environment , install the product and go and make yourself a cup of tea. I had a few teething problems getting it to work , but that may have been related to my patience level ! 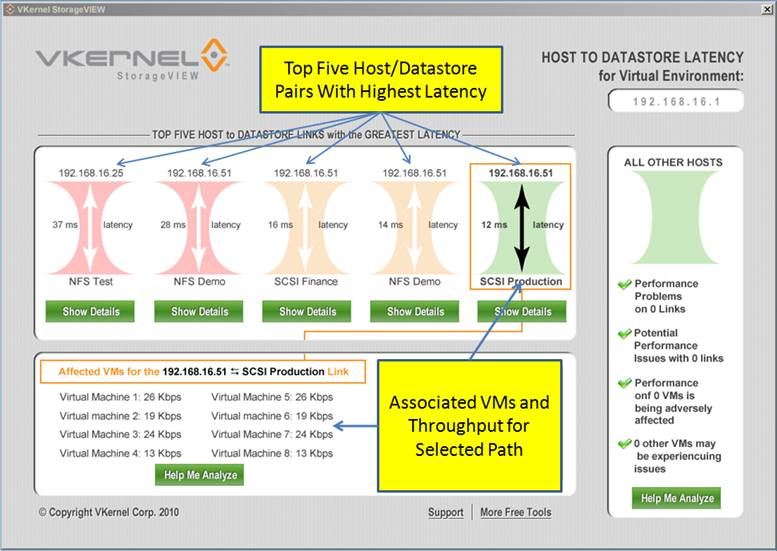 If you find the data on this useful and want to know more , then the app encourages you to look at the full blown capacity analyser appliance – which you may find well worth a trial anyways. I’m told that not all of the metrics in Storage view are in the current version of CA , but will be in the next version , due for release fairly shortly.

As a paying customer to Vkernel I’d like to be able to leverage this functionality a bit further as an alternate front end for the virtual appliances I already have deployed , it would also be nicer ( again for paying users ) to be able to slice and dice the data from the app a little more ( ie more than top5 , or to scope by datacenter / cluster )

« VCAP-DCA Beta Experience The most unusual Twitter Client yet! »