StorageView – beyond the Press release
Filed Under: Virtualisation by chris — Leave a comment

On Monday , I blogged about the new freeware application from vKernel, StorageView –.I , like a number of other bloggers had got a chance to see the product pre release, and was able to download the application to evaluate before its public release.

I have to admit I was having a pretty full timetable , so don’t feel I gave the post my full attention , beyond an install and a brief glance to see what it was like, I had other fires to fight and my day job took precedence ( as it should ! )

Yesterday ,I was talking with some of the vkernel product team who wanted to verify that the product not only works in small scale environments but larger ones. As I have access to a reasonably large environment I was able to install a slightly updated version and test , I’m quite glad of this as it actually gave me some time to really study the figures and see what was happening to my environment , rather than a test lab. What I got was shown below. 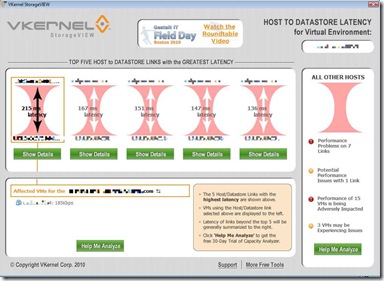 Even through the pixilation I’ve applied you might be able to see that 4 of the top 5 offenders are on the same host – I happen to know that host is in a prod 3.5 cluster that has recently been part of a fabric upgrade. ON closer investigation I discovered that one of the HBA’s was not seeing its full compliment of paths , most likely due to it not picking up the change in fabric.One HBA rescan later and paths have been restored and latency significantly reduced. There’s something still not quite right however but that’s for a trip to the datacenter armed with a pack of fibre interconnects and a frying pan to batter whoever might have caused some cable damage 😉

(please note no datacenter technicians have been harmed during the writing of this post…….yet )