Last week I was invited to an online preview of a new application from VKernel – fine purveyors of Capacity Management solutions and numerous free tools which should be part of every VM admins toolkit such as Capacity View and Capacity Modeller.

The new free product is called Appview and in a nutshell allows you to run a system tray homed traffic light based health view of  up to 5 of your favourite Virtual Machines.

While most of you probably run more than 5 VM’s in your environment , I don’t think the tool is fully targets at yourself , but think of your end user support teams running an application with 5 of less VM’s , this would give your application admins a great and intuitive overview of their applications health within your virtual infrastructure , allowing them to concentrate on solving application based issues before they blame the fact that its a VM ( not that this would ever happen in the real world 😉 )

The application is pretty simple to configure. Install from MSI then supply it with some virtual center locations and credentials. Right clicking the system tray icon brings up the main screen. 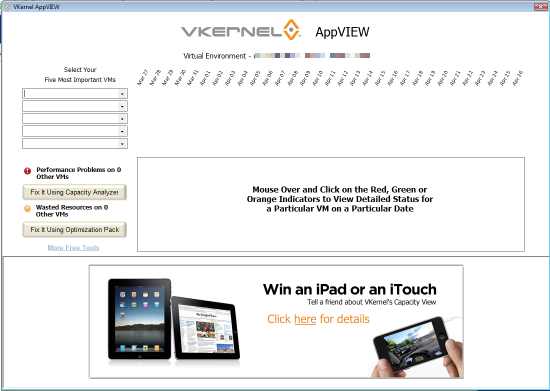 Note the Adverts and plug for the full version capacity analyser / optimization pack products – it would be nice to possibly have a paid for version of this product to remove the ads and add a little more flexibility, but more about that later.

I wasn’t able to run the tool for long enough to generate a “full screen” of results , so have lifted the following screenshot directly from vkernel’s website.

You can see the overview of the 5 VM’s over the last 30 days ( although in the shot above its not quite been running that long )  clicking on a given icon for a given server on any day its been collecting data will give you a breakdown of which resource is in or out of tolerance. These tolerances are configurable from the application.

For a free product its a nice little showcase of what you can achieve with the Vkernel toolset although I don’t know if it will have as much imediate value as the Capacity View product. Where it could really come into its own is as a complimentry product to include with the licenced offerings that would integrate the “click here to fix” with taking you to the right part of your particular VKernel installation. Allowing for more VM’s to be monitored and the abilailty to deploy precompiled monitors for a set of VM’s with a fixed set of tolerances to potentialy open up a view of your virtual infrastructure to non VM-aware collegues.

The application is due for release tommorow ( 27/04/2010 )  and you can read more about it over at the VKernel site here: